‘Juifs d’Orient. Une histoire plurimillenaire’ is the final part of a trilogy of exhibitions dedicated to each of the three monotheistic religions shown at the at the Institut du Monde Arabe, following ‘Hajj, le pèlerinage à La Mecque’ and ‘Chrétians d’Orient. Deux mille ans d’histoire’ and is showing from 24 November 2021 to 13 March 2022

The exhibition looks at the history of Jewish communities in Arab countries and focuses on the cultural interactions that characterized Judaism covering a vast chronological period from middle of the first millennium BC to the present day.

The first large-scale exhibition on this theme brings together 280 objects, including archaeological material, manuscripts, textiles, liturgical objects, photographs, music and audio-visual installations from a variety of collections around the world.

For Jack Lang, President of the Institut du Monde Arabe, one of the purposes of the exhibition is to counteract stereotypes of the Arab world, noting ‘knowledge is the greatest weapon against intolerance’ and the importance attached to this message was underlined by the fact that Juifs d’Orient was opened by President Macron.

Sheikh Mohamed has been committed to supporting cultural dialogue for more than twenty years through his MBI Al Jaber Foundation and his personal philanthropy.

The exhibition has accompanying activities and a catalogue. For more information see: https://www.imarabe.org/fr/expositions/juifs-d-orient 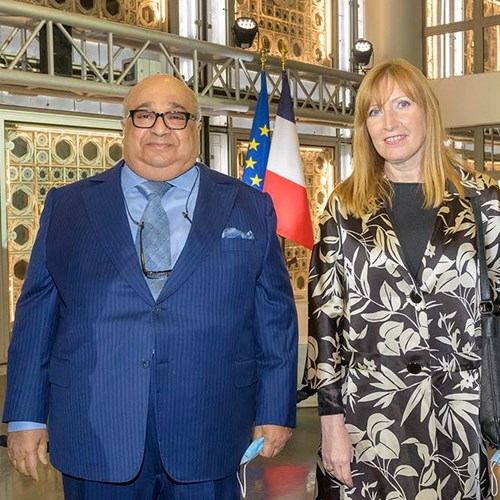